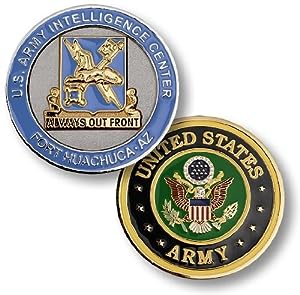 $13.99
Not Available - stock arriving soon
Product prices and availability are accurate as of and are subject to change. Any price and availability information displayed on at the time of purchase will apply to the purchase of this product.
Product Information (more info)
0 0

The US Army Intelligence Center at Fort Huachuca is the heart of the US Army's military intelligence structure. The Center is the source of all of the Army's trained Intelligence manpower and the developer and tester of its systems and equipment. In modern warfare, the force that has the fastest, most accurate intelligence will be the victor.

Creation of the present US Army Intelligence Center occurred in 1973 when the former Intelligence School combined forces with the Combat Surveillance/Electronic Warfare School and the US Army Combat Developments Command Intelligence Agency. This amalgamation added combat surveillance aspects to the school's academic instruction and gave the Intelligence Center an expanded combat and training development role. The sophistication of today's combat systems demands the finest in combat intelligence as well as in the more traditional roles of interrogation and counterintelligence.

I Love My Marine Challenge Coin