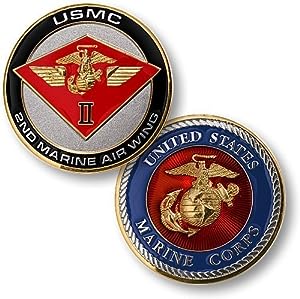 This brass coin salutes the 1st Marine Aircraft Wing of the U.S.M.C. Struck in a brass alloy, this coin has an attractive use of enamel, making a striking impression. The reverse contains the logo of the Marines set in a semitransparent red enamel that allows the look of radience. The coin comes packaged in a polybag with a header card.

The mission of the 2nd MAW is to conduct air operations in support of the Marine Forces, including offensive air support, anti air warfare, assault support, aerial reconnaissance, electronic warfare, and control of aircraft and missiles. The MAW may also participate in naval aviation in the execution of such other Navy functions as the Fleet Commander may direct.

In late 1940, Congress authorized a naval air fleet and the Marine Corps was allotted a percentage of these planes to be formed into 2 air wings. On the advice of Navy and Marine advisors returning from observing the war in Europe these numbers were doubled. Under this expansion program the 2nd Marine Aircraft Wing was activated in San Diego, California on July 10, 1941. Its first component was Marine Air Group Two, based at Marine Corps Air Station Ewa, Hawaii.