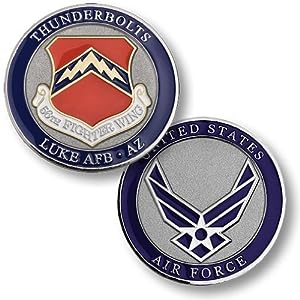 As of 2021-05-06 09:02:09 UTC (more info)
Not Available - stock arriving soon
Product prices and availability are accurate as of 2021-05-06 09:02:09 UTC and are subject to change. Any price and availability information displayed on http://www.amazon.com/ at the time of purchase will apply to the purchase of this product.
Product Information (more info)
0 0

The 56th Fighter Wing, Luke AFB, is the largest fighter wing in the world. Continuing the legacy of over 50 years of tactical air prowess, the 56th Fighter Wing is dedicated to training the finest F-16 pilots for the United States and allied forces, while maintaining the highest level of combat readiness. The Wing is home to more than 170 F-16 aircraft, and graduates more than 400 F-16 pilots and 470 crew chiefs annually. This coin salutes the accomplishments of the Wing.

The 56th Fighter Wing is one of the most highly decorated aviation units in history. It traces its history to WWII when its pilots flew P-47 Thunderbolts, thus the name they proudly claim today-"Thunderbolts." During its two-year involvement in the air war in Europe, the group damaged or destroyed 1,598 enemy aircraft, incredibly losing only 25 of their own in aerial combat. The 56th produced 39 fighter aces. Today, the 56th Fighter Wing remains the Air Force's only active-duty F-16 training wing.

The obverse of this handsome challenge coin recreates the 56th Fighter Wing emblem-"Thunderbolts-Luke AFB, AZ." The reverse is the United States Air Force emblem. The coin has recessed and raised surfaces, and is finished in rich enamels.

only $4.95
Not Available
View Add to Cart