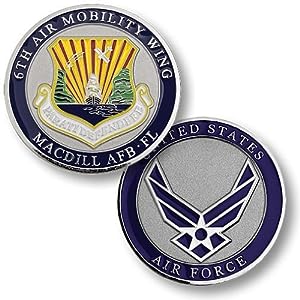 As of 2021-05-05 08:09:43 UTC (more info)
Not Available - stock arriving soon
Product prices and availability are accurate as of 2021-05-05 08:09:43 UTC and are subject to change. Any price and availability information displayed on http://www.amazon.com/ at the time of purchase will apply to the purchase of this product.
Product Information (more info)
0 0

The MacDill Air Force Base challenge coin commemorates the seven decades of air training and combat service provided to our country by the warriors at MacDill. MacDill first protected our shores from German submarines, then trained combat crews for the B-26, B-17, B-29, and B-47 bombers, fearless "air warriors" who were proud members of the world's elite air fighting force. Later, MacDill hosted tactical fighter squadrons of F-84F and F-4C Phantom II fighters.

In today's Air Force, MacDill operates a fleet of KC-135R Stratotankers capable of refueling a variety of aircraft in mid-air, anywhere in the world, under any weather condition. The 91st Air Refueling Squadron of 6th Air Mobility Wing fueled combat aircraft for United States and coalition forces during the wars in Bosnia, Afghanistan, and Iraq, and continue today with global capability.

The MacDill AFB coin features recessed and semi-sandblasted surfaces, and is highlighted in rich enamels. The obverse of the coin reproduces the MacDill AFB emblem, the shield featuring a frontal profile of the 18th century pirate ship of Jose Gasparilla, famous pirate who plundered the west coast of Florida. The reverse is the United States Air Force emblem.