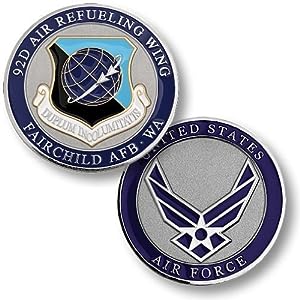 The 92nd Air Refueling Wing at Fairchild AFB in Spokane, Washington, is capable of not only initiating an air bridge across the nation and the world to refuel United States or allied aircraft, but of maintaining it indefinitely. Aircraft fuel endurance is no longer limited to a few hours or limited miles. The 92nd Air Refueling challenge coin salutes this amazing capability which contributes directly to America's combat and disaster-relief superiority.

Prior to 1994, the 92nd was known as the 92nd Bomb Wing, dispatching B-52 bombers around the world in defense of Liberty. With the end of the bomber mission, the 92nd became the largest air refueling wing in the United States Air Force. Now, the 92nd Air Refueling Wing is proud to be known as "The Best Global Reach for America," deploying anywhere in the world.

The obverse of this handsome challenge coin recreates the 92nd Air Refueling Wing emblem. The globe encircled by an endless arrow signifies the constant 24-hour refueling capabilities. The banner reading "Duplum Incolumitatis"-"Twofold Security" recalls the Wing's legacy of Strategic Air Command B-52 heavy bomber air power in addition to the present refueling role. The coin reverse is the United States Air Force emblem. The coin has recessed and raised surfaces, and is finished with rich enamels.

only $9.95
Not Available
View Add to Cart
CERTAIN CONTENT THAT APPEARS ON THIS SITE COMES FROM AMAZON SERVICES LLC. THIS CONTENT IS PROVIDED 'AS IS' AND IS SUBJECT TO CHANGE OR REMOVAL AT ANY TIME.