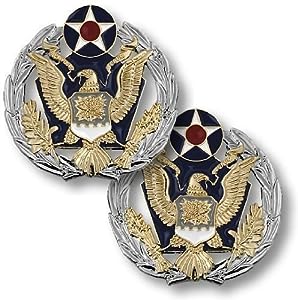 As of 2021-02-24 15:37:19 UTC (more info)
Not Available - stock arriving soon
Product prices and availability are accurate as of 2021-02-24 15:37:19 UTC and are subject to change. Any price and availability information displayed on http://www.amazon.com/ at the time of purchase will apply to the purchase of this product.
Product Information (more info)
0 0

Under the direction of the Chief of Staff of the United States Air Force, you are responsible for the organization, training, and equipping of more than 700,000 active-duty Air Force, National Guard, Reserve, and civilian forces serving in the United States and overseas. Deserving of your responsibility and achievement, you can now capture the honor of this service with the Air Staff challenge coin.

The basis for the Air Staff Badge-and therefore for this commemorative coin-is the heritage of the United States Air Force. The design incorporates many elements from the Department of the Air Force Seal. The predominant colors are ultramarine blue and gold, the colors of the Air Force through transition from the Army Air Corps. At the center is an American Bald Eagle, a symbol of the United States and air power. The eagle is holding an olive branch and a bundle of 13 arrows, denoting the power of peace and war-the heart of the Air Force mission. The Air Force shield is at the core of the eagle. A wreath, an ancient symbol of victory, encircles the eagle and meets the original Army Air Corps symbol. In his beak the eagle holds a streamer with the Latin motto "E pluribus unum"-"Out of many, one."

This elegant and impressive coin is minted in bronze and enhanced with rich enamel finishes, befitting of those who serve in the most vital and trusted positions.