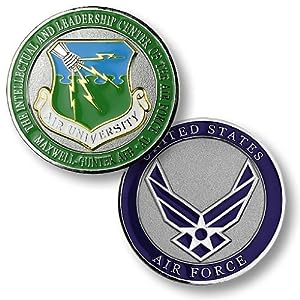 As of 2021-03-01 00:28:02 UTC (more info)
Not Available - stock arriving soon
Product prices and availability are accurate as of 2021-03-01 00:28:02 UTC and are subject to change. Any price and availability information displayed on http://www.amazon.com/ at the time of purchase will apply to the purchase of this product.
Product Information (more info)
0 0

Maxwell-Gunter AFB, AL is headquarters of Air University, the United States Air Force's center for Joint Professional Military Education. It is rightly known as "The Intellectual and Leadership Center of the Air Force."

Air University is comprised of three principal schools. The first is Squadron Officer School, a two-month program oriented towards First Lieutenants and Captains in the Regular Air Force, Reserve, and Air National Guard. The second, Air Command and Staff College, is a year-long program, considered the 'intermediate level,' to include the ranks of Major, Lieutenant Commander, Squadron Leader, or equivalent. The third program, Air War College, is also a year-long program and selects students from the ranks of Lieutenant Colonel, Commander, Wing Commander, or equivalent. This is the 'senior' level of instruction. Numerous other training disciplines are included at the Center.

The Maxwell-Gunter AFB challenge coin captures the essence of the facility. The obverse is the insignia of Air University, surrounded by the declaration "The Intellectual and Leadership Center of the Air Force." The reverse is the United States Air Force emblem.