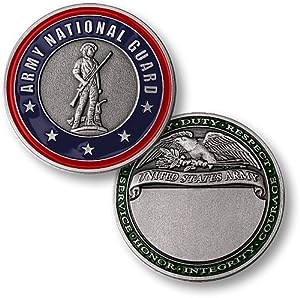 As of 2021-05-14 08:00:09 UTC (more info)
Not Available - stock arriving soon
Product prices and availability are accurate as of 2021-05-14 08:00:09 UTC and are subject to change. Any price and availability information displayed on http://www.amazon.com/ at the time of purchase will apply to the purchase of this product.
Product Information (more info)
0 0

The perfect gift for anyone serving in the Army National Guard, this coin is easily personalized with an engravable reverse.

Throughout America's history, there have always been those who have believed that freedom is a cause worthy of great sacrifice. When America's thirteen colonies united to break free from the burden of British rule, a band of bold men - known to history as the Minutemen - led the way. Though America's modern defenders of freedom wear a different uniform, they are part of the same great tradition of citizen-soldiers.

The Army National Guard is a significant component of the U.S. Army, comprising nearly one-half of its available combat forces. Throughout the nation's history, it has provided highly skilled and dedicated soldiers to aid every major American military campaign.

This coin pays tribute to all the fearless men and women who have served America's Army National Guard with pride. The obverse features a Minuteman armed with a traditional musket. The reverse contains a space for engraving.

Minted in a nickel alloy, this coin is coated in an antique finish. Each piece comes with a descriptive header card that details the history and mission of the United States Army National Guard.

only $14.99
Not Available
View Add to Cart
CERTAIN CONTENT THAT APPEARS ON THIS SITE COMES FROM AMAZON SERVICES LLC. THIS CONTENT IS PROVIDED 'AS IS' AND IS SUBJECT TO CHANGE OR REMOVAL AT ANY TIME.