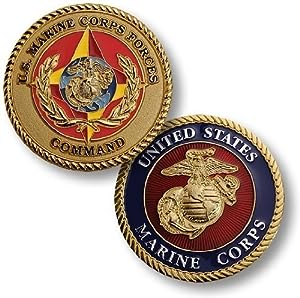 As of 2021-03-01 05:59:17 UTC (more info)
Not Available - stock arriving soon
Product prices and availability are accurate as of 2021-03-01 05:59:17 UTC and are subject to change. Any price and availability information displayed on http://www.amazon.com/ at the time of purchase will apply to the purchase of this product.
Product Information (more info)
0 0

If you, or someone you know, is numbered among those who have served in US Marine Corps Forces Command (MARFORCOM), this is your coin. This colorful and memorable challenge coin is is made to be carried by the few and the proud - the US Marines have challenged and defeated history's most ruthless regimes.

In MARFORCOM's support of USJFCOM global objectives, these tough and tenacious warriors have engaged America's enemies with gritty determination, fighting for victory with resounding bravery and unequaled skill. Respected for their commitment to defending freedom, their service and sacrifice inspires all Americans.

This coin salutes all MARFORCOM warriors for their exceptional courage and fidelity to duty in defense of freedom around the world.

Minted in a hard-wearing alloy and imbued with full-color enamel, this coin comes packaged with a detailed header card that hails the courage and skill demonstrated by all Marine Corps personnel who have served as part of MARFORCOM.