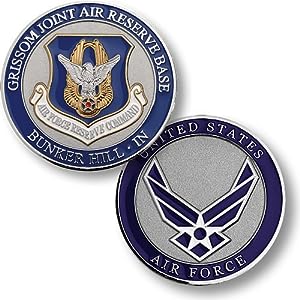 As of 2021-05-05 13:23:08 UTC (more info)
Not Available - stock arriving soon
Product prices and availability are accurate as of 2021-05-05 13:23:08 UTC and are subject to change. Any price and availability information displayed on http://www.amazon.com/ at the time of purchase will apply to the purchase of this product.
Product Information (more info)
0 0

The Grissom Joint Air Reserve Base coin commemorates the Base's vital contribution and the memory of its namesake. Grissom Joint Air Reserve Base hosts the largest Boeing KC-135R Stratotanker wing in the Air Force Reserve Command. The Base is named after Lieutenant Colonel Virgil "Gus" Grissom, one of three astronauts who died in the Apollo I accident at Kennedy Space Center January 27, 1967. Lieutenant Colonel Grissom was from Indiana, attended Purdue University, and served as a fighter pilot in the Korean War, flying over 100 missions and earning the Distinguished Flying Cross. He was a graduate of the US Air Force Test Pilot School, Edwards Air Force Base, and was one of the original Mercury Astronauts.

The host wing at Grissom is the 434th Air Refueling Wing, which holds the record for most aerial refueling in a one-week period. It is one of the key refueling units in the Air Force Reserve. In 2008, Grissom Joint Air Reserve Base opened to civil aviation operations. The local aviation authority promotes the airport to business jet traffic as a refueling stop for long cross-country flights. Its extremely long runway and excellent instrument navigation facilities make Grissom well suited to this role.

This handsome challenge coin displays the Air Force Reserve Command's insignia on the obverse, the circumference reading "Grissom Joint Air Reserve Base, Bunker Hill, IN." The reverse is the US Air Force emblem. The coin is highlighted in rich enamels.

only $9.95
Not Available
View Add to Cart

only $9.99
Not Available
View Add to Cart
CERTAIN CONTENT THAT APPEARS ON THIS SITE COMES FROM AMAZON SERVICES LLC. THIS CONTENT IS PROVIDED 'AS IS' AND IS SUBJECT TO CHANGE OR REMOVAL AT ANY TIME.