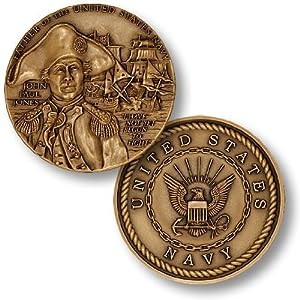 "I have not yet begun to fight." These stirring words uttered in 1779 by Captain John Paul Jones during one of the bloodiest engagements in naval history live on today as a reminder of perseverance and valor. Carry this challenge coin as inspiration, especially if the battle appears to be lost.

John Paul Jones was an unforgiving adversary of the crown, fighting and raiding boldly in British home waters. He became a true hero of the American Revolution on September 23, 1779 during a vicious sea battle with the 44-gun Royal Navy frigate Serapis off Flamborough Head, Yorkshire. Although his own Bonhomme Richard was ablaze and sinking, Jones rejected the British demand for surrender. Three hours later, it was Serapis that surrendered.

All Naval personnel today recognize John Paul Jones for having established the service's tradition of courage and professionalism. Today, the men and women of the US Navy fight for liberty and freedom from tyranny just as Jones did in the American Revolution.

Jones's famous words are cut into our history and engraved on the obverse of this solid bronze coin with an antique patina, which pays tribute to the man considered to be the father of the United States Navy. The reverse depicts an emblem of the US Navy, featuring an eagle grasping an anchor in its talons, encircled by chains and rope, symbolic of naval traditions dating back to the nation's first ships.