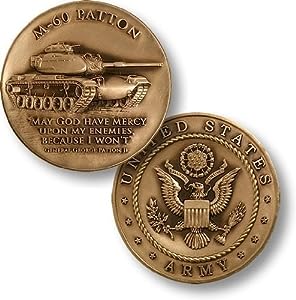 This M-60 Patton Army challenge coin is the perfect gift or for soldiers, tank enthusiasts, and warriors of every breed. The coin salutes the tank that embodied the dogged determination and unquenchable thirst for victory of America's most legendary tank commander: General George S. Patton, Jr.

As one of the toughest combat tanks in U.S. Army history, the M60 Patton tank truly lives up to its fire-breathing namesake.

The M-60 Series, though never officially classified as a Patton tank, was a more powerful and lethal version of the M-48 Patton series and soon became known as the M-60 Patton. First seeing action in 1961, the M-60 Patton was fast, maneuverable, and capable of delivering devastating firepower. Carrying a 105 mm main gun and a four-man crew, it proved its durability and quality as the U.S. Army's first main battle tank during the Cold War.

As it defended American freedom well into the first Gulf War, the M-60 Patton remained truly worthy of its connection to one of history's greatest tank commanders.

The challenge coin's obverse contains a depiction of the tough M60 Patton tank encircled by the famous words of Patton "May God have mercy on my enemies, because I won't." The reverse bears the official seal of the U.S. Army.

Minted in deep relief using a special "splash minting" process, this coin is struck in a brass alloy and finished in antique bronze.

only $12.99
Not Available
View Add to Cart
CERTAIN CONTENT THAT APPEARS ON THIS SITE COMES FROM AMAZON SERVICES LLC. THIS CONTENT IS PROVIDED 'AS IS' AND IS SUBJECT TO CHANGE OR REMOVAL AT ANY TIME.