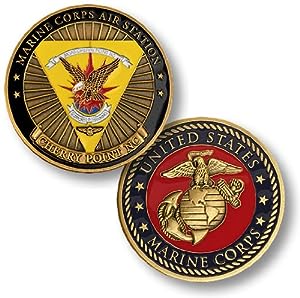 The Marine Corps Air Station Cherry Point, NC, is one of the outstanding aviation facilities in the United States. This challenge coin salutes the exceptional contribution to America's combat air power and space exploration effort.

Marine Corps Air Station Cherry Point is one of the best all-weather jet bases in the world. Its runway system is so large that the Air Station served as an alternate emergency landing site for the space shuttle launches out of Cape Canaveral, Florida.

This handsome coin displays the distinctive MCAS Cherry Point insignia, finished with rich enamels in the Cherry Point colors. The reverse is the official US Marine Corps symbol.

only $9.95
Not Available
View Add to Cart

only $15.00
Not Available
View Add to Cart
CERTAIN CONTENT THAT APPEARS ON THIS SITE COMES FROM AMAZON SERVICES LLC. THIS CONTENT IS PROVIDED 'AS IS' AND IS SUBJECT TO CHANGE OR REMOVAL AT ANY TIME.