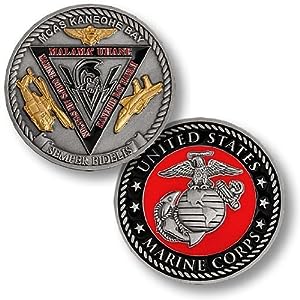 As of 2021-05-14 08:47:02 UTC (more info)
Not Available - stock arriving soon
Product prices and availability are accurate as of 2021-05-14 08:47:02 UTC and are subject to change. Any price and availability information displayed on http://www.amazon.com/ at the time of purchase will apply to the purchase of this product.
Product Information (more info)
0 0

During the rich history of Marine Corps Air Station Kaneohe Bay, it has played vital roles for the Army and Navy, and currently for the Marine Corps. For over half a century the base has been responsible for training countless aircraft carrier pilots for combat, providing logistical support for naval aviation forces throughout the vast Pacific region, and supporting early warning airborne and anti-submarine patrol operations. MCAS Kaneohe Bay is located on the Northeastern coast of the island of Oahu.

MCAS Kaneohe Bay was attacked by the Imperial Japanese Navy while en route to Pearl Harbor on December 7, 1941. In the war period, the air station was a major training base in the Pacific theater. Thousands of Navy gunners were trained at the Fleet Gunnery School. There were also training facilities dedicated to celestial navigation, sonar, aircraft recognition, and turret operations. Flight instruction for the Navy and Marine Corps aviators was provided prior to being sent to forward combat areas.

In keeping with the rich traditions of the base, the MCAS Kaneohe Bay challenge coin pays tribute to the countless service personnel who passed through this base on their path to history.