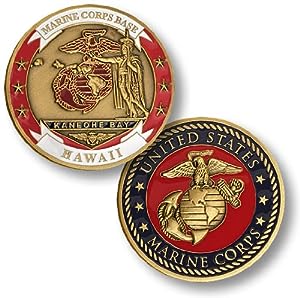 As of 2021-05-08 13:20:51 UTC (more info)
Not Available - stock arriving soon
Product prices and availability are accurate as of 2021-05-08 13:20:51 UTC and are subject to change. Any price and availability information displayed on http://www.amazon.com/ at the time of purchase will apply to the purchase of this product.
Product Information (more info)
0 0

This special coin salutes the outstanding service record of Marine Corps Base Kaneohe Bay, Hawaii. Attacked by the Japanese minutes prior to the attack on Pearl Harbor, the base lost 27 Catalina flying boats and 18 sailors. From that moment forward the base trained thousands of Navy and Marine pilots for land, sea, and carrier operations that-once unleashed-defeated the enemy.

In 1994 the US Marine Corps consolidated all of its installations in Hawaii, and Kaneohe Bay became Marine Corps Base Hawaii. Comprised of Combat Logistics Battalion 3, 3rd Marine Regiment, Marine Aircraft Group 24, and 3rd Radio Battalion, the base provides electronic intelligence and tactical support, and maintains three squadrons of CH-53D Sea Stallion helicopters, with attending maintenance and logistics squadrons.

only $4.95
Not Available
View Add to Cart

only $14.99
Not Available
View Add to Cart
CERTAIN CONTENT THAT APPEARS ON THIS SITE COMES FROM AMAZON SERVICES LLC. THIS CONTENT IS PROVIDED 'AS IS' AND IS SUBJECT TO CHANGE OR REMOVAL AT ANY TIME.