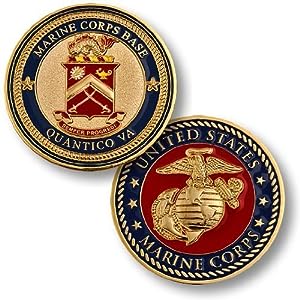 This coin, minted for every Marine who has passed through the "Crossroads of the Marine Corps," is every Leatherneck's easy-to-carry tribute to Marine Corps Base Quantico. Sometimes abbreviated MCB Quantico, this key United States Marine Corps training base is located near Triangle, Virginia.

Matching its moniker, the MCB Quantico challenge coin is bold and memorable, capturing the significant role that MCB Quantico plays for the Marine Corps. It honors all courageous Marines who have served or passed though MCB Quantico during its long and storied history.

only $12.00
Not Available
View Add to Cart
CERTAIN CONTENT THAT APPEARS ON THIS SITE COMES FROM AMAZON SERVICES LLC. THIS CONTENT IS PROVIDED 'AS IS' AND IS SUBJECT TO CHANGE OR REMOVAL AT ANY TIME.