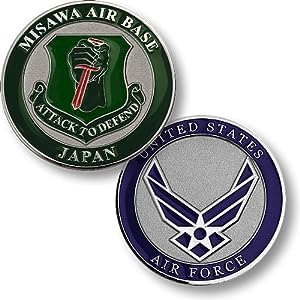 As of 2021-05-09 03:23:44 UTC (more info)
Not Available - stock arriving soon
Product prices and availability are accurate as of 2021-05-09 03:23:44 UTC and are subject to change. Any price and availability information displayed on http://www.amazon.com/ at the time of purchase will apply to the purchase of this product.
Product Information (more info)
0 0

This American Air Base has been a pivotal part of American military action since 1945, and the military use of its land by the Japanese dates back to the 19th century, when it was used as a cavalry training center. Converted in 1938 to an air base by the Imperial Army of Japan, the United States took control in September 1945. In the years since, the base, 425 miles north of Tokyo, has supported US fighter missions during the Korean and Vietnamese Wars and was the origin for covert surveillance overflights into China and the USSR during the Cold War.

As the command base for Pacific Air Forces, Misawa's mission is to promote security in the Asia-Pacific region by supplying ready air and space power and to serve in defense of Japan. It is the only combined, joint service installation in the western Pacific, also hosting US Naval aviation and Japanese Air Self Defense Forces.

Whether they served as ground support or aviators, in the Air Force or the Navy, all of the military and civilian personnel who lived and worked at Misawa Air Base have played an essential role in projecting American force and protecting American interests for the better part of a century. This coin recognizes that teamwork and pays tribute to it.

Whether you or somebody you know served in an Air Wing, Squadron, or in a support role, the Misawa Air Base challenge coin is a tribute to the many individuals who have served at this vital base. Struck in an antique nickel finish, the obverse features the emblem of the 35th Fighter Wing - a red dagger grasped at the ready -- and its motto, "Attack to Defend." On its reverse is the symbol of the US Air Force.