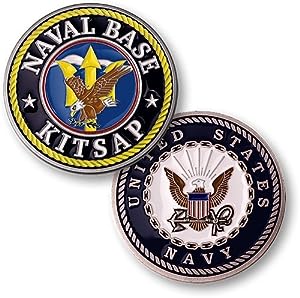 As of 2021-05-06 23:58:33 UTC (more info)
Not Available - stock arriving soon
Product prices and availability are accurate as of 2021-05-06 23:58:33 UTC and are subject to change. Any price and availability information displayed on http://www.amazon.com/ at the time of purchase will apply to the purchase of this product.
Product Information (more info)
0 0

Kitsap Naval Base commands an imposing presence as the largest and most-recognized naval organization in the Navy Region Northwest. Take hold of this stunning, die-struck coin and salute the proud men and women who defend the waters of the Pacific Northwest and beyond.

Created in 2004, when the Naval Station Bremerton and the Naval Submarine Base Bangor merged, NB Kitsap is the host command of the Navy's fleet throughout the West Puget Sound region. The thousands of sailors who train and work here provide base operating services, including support for surface ships and submarines homeported at Bremerton and Bangor.

The excellence of the naval personnel at the base is routinely recognized, most recently in 2005 when the base received the Commander in Chief's Award for Installation Excellence as the best base in the U.S. Navy. The Northwest's finest naval base has a long and distinguished history of supporting America's fighting forces, acting as an ammunitions depot for operations in the Pacific theater in WW II as well as serving as the source for weaponry during the Vietnam and Korean Wars. In 1973, the Bangor base became the homeport for the first squadron of Trident submarines.

Struck in a nickel alloy and brushed with an antique finish, this coin is imbued with bright enamel highlights.

only $14.79
Not Available
View Add to Cart
CERTAIN CONTENT THAT APPEARS ON THIS SITE COMES FROM AMAZON SERVICES LLC. THIS CONTENT IS PROVIDED 'AS IS' AND IS SUBJECT TO CHANGE OR REMOVAL AT ANY TIME.