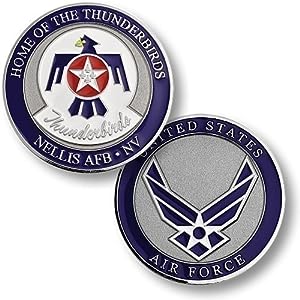 As of 2021-03-01 01:11:28 UTC (more info)
Not Available - stock arriving soon
Product prices and availability are accurate as of 2021-03-01 01:11:28 UTC and are subject to change. Any price and availability information displayed on http://www.amazon.com/ at the time of purchase will apply to the purchase of this product.
Product Information (more info)
0 0

Nellis Air Force Base-"Home of the Fighter Pilot"-is a member of the United States Air Force's Air Combat Command. It is the home to the largest and most demanding advanced air combat training in the world. More than 40,000 sorties a year are flown from this southern Nevada facility, including every type of aircraft in the Air Force inventory.

The signature presence at Nellis is the United States Air Force Thunderbirds. They are the air demonstration squadron of the U.S. Air Force, not only touring the United States but much of the world, performing aerobatic formation and solo flying in specially-marked jet aircraft. The current team is made up of 12 Officers and more than 120 Enlisted Air Force members, coming together from over 30 career fields to make the 'Thunderbird excitement' happen.