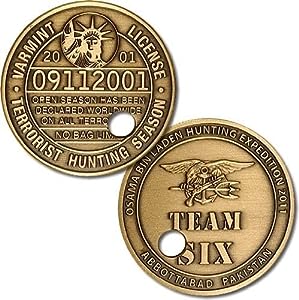 After the attacks of 9/11, everyone in America, if not the world wanted Osama bin Laden - dead or alive. Now we have bagged the big one. Even though you may not have been part of the successful May 2, 2011 SEAL Team Six mission that brought Osama bin Laden to ultimate justice in the town of Abbottabad, Pakistan, you can carry this challenge coin to show your admiration for the brave team of warriors who finally punched Osama's ticket - and take credit for your part in the effort as an American.

The obverse of the Osama bin Laden "Punched Ticket" Challenge Coin is your terrorist hunting permit and varmint license. The reverse features the US Navy Special Warfare (SEAL) trident insignia with "Team Six" written below, enabling you to proudly show your support for the hunting expedition led by the heroic members of SEAL Team Six as they hunted down the world's most wanted terrorist like the animal he was... and gave him exactly what he deserved.

Struck in antique-finished MerlinGold®, this unique challenge coin features a hole drilled at the 5 o'clock position to symbolize Osama's ticket being punched - a hole sized perfectly for a 5.56mm bullet to pass cleanly through. Proudly minted in the United States.

only $19.99
Not Available
View Add to Cart
CERTAIN CONTENT THAT APPEARS ON THIS SITE COMES FROM AMAZON SERVICES LLC. THIS CONTENT IS PROVIDED 'AS IS' AND IS SUBJECT TO CHANGE OR REMOVAL AT ANY TIME.