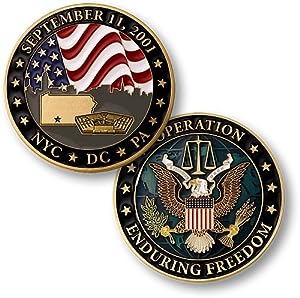 This Operation Enduring Freedom challenge coin honors those who lost their lives on September 11, 2001 and pays tribute to those who protect America's freedom no matter the coast. Treasure it for yourself or give as a gift as a symbol of your resolve to never forget.

On September 11, 2001, evil showed its face to America when terrorists attacks destroyed the World Trade Center in New York, inflicted significant damage on The Pentagon, and downed United Flight 93 in Pennsylvania.

Though the nation was stunned by these unforgivable acts, the resolve of a country was proven in the moments after. Since those attacks America's military rolled out with Operation Enduring Freedom. Committed to nothing less than destroying the enemy during this operation, America's Armed Forces brought their overwhelming will and power to bear upon those who would harm us.

Depicted beneath Old Glory unfurled, the obverse features the three locations where those brave Americans lost their lives on September 11. The reverse contains the words "Operation Enduring Freedom."

only $15.95
Not Available
View Add to Cart
CERTAIN CONTENT THAT APPEARS ON THIS SITE COMES FROM AMAZON SERVICES LLC. THIS CONTENT IS PROVIDED 'AS IS' AND IS SUBJECT TO CHANGE OR REMOVAL AT ANY TIME.