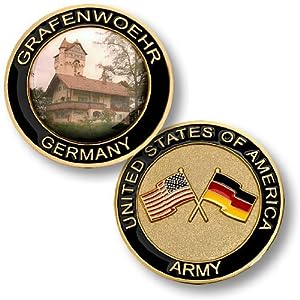 The United States Army operates one of the largest training areas in the world at Grafenwoehr, Germany. The training ranges allow for testing and training on nearly every weapons system currently used in the Army.

After a German Commander surrendered in 1945, Grafenwoehr was primarily used by the Army and allied forces throughout the Cold War as a forward training post.

Minted from solid bronze, and imbued with bold colored enamel, this medallion is dedicated to the tireless service of the men and women in the U.S. Army stationed in Grafenwoehr, Germany. The obverse features a picture of the Army training grounds in Grafenwoehr, with the famous Water Tower in the background. The reverse displays the flags of the United States of America and Germany, crossed in friendship.

only $10.00
Not Available
View Add to Cart
CERTAIN CONTENT THAT APPEARS ON THIS SITE COMES FROM AMAZON SERVICES LLC. THIS CONTENT IS PROVIDED 'AS IS' AND IS SUBJECT TO CHANGE OR REMOVAL AT ANY TIME.