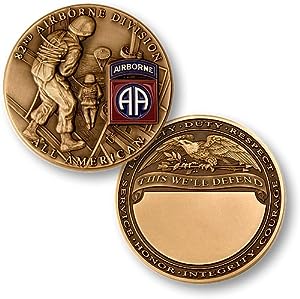 Ever ready and willing to jump into danger, the 82nd Airborne Division has an unequaled record of distinguished service that spans over nine valiant decades. Formed on August 25, 1917 from members of every state, the division became known as the "All Americans" and that title has been proudly associated with this honored group of warriors ever since.

The 82nd Airborne has played a crucial role in defending America's freedom and liberty throughout its celebrated history. On Aug 15, 1942, the 82nd became the first airborne division in the U.S. Army and has taken its renowned fearlessness to the skies of Normandy in World War II, to the jungles of Vietnam performing combat duties in the Tet Offensive as well as its combat actions in Panama, Afghanistan and Iraq and to numerous peace-keeping operations.

The "All Americans" are united by their paratrooper's creed which implores them to place the mission first and to never leave a fallen comrade behind or accept defeat.

The obverse of the coin pictures the warriors of the 82nd in their element, jumping from an open aircraft towards the earth below. The well known symbol of this division, the "AA" logo, is also shown. The reverse features an open area suitable for engraving a name or personal message.

only $15.95
Not Available
View Add to Cart
CERTAIN CONTENT THAT APPEARS ON THIS SITE COMES FROM AMAZON SERVICES LLC. THIS CONTENT IS PROVIDED 'AS IS' AND IS SUBJECT TO CHANGE OR REMOVAL AT ANY TIME.