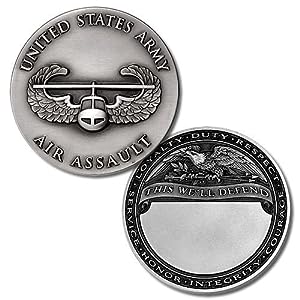 As of 2021-04-14 05:51:15 UTC (more info)
Not Available - stock arriving soon
Product prices and availability are accurate as of 2021-04-14 05:51:15 UTC and are subject to change. Any price and availability information displayed on http://www.amazon.com/ at the time of purchase will apply to the purchase of this product.
Product Information (more info)
0 0

The US Army Air Assault Challenge Coin is inspired by the US Army Air Assault Badge, awarded to those Air Mobile Assault warriors who have successfully completed rigorous training in fast rope/hover rappel insertions, vertical extractions and helicopter insertions into landing zones where it becomes these warriors' mission to seize key terrain and to directly engage and destroy enemy forces. You were proud to earn the Badge, you will be proud to own this coin. Present this coin as a valued gift to a family member or friend who has qualified to wear the Badge.

The US Army Air Assault Badge was approved by the US Army Chief of Staff on 18 January, 1978, for Army-wide wear by individuals who successfully completed Air Assault training after 1 April, 1974. The badge had previously been approved as the Airmobile Badge authorized for local wear by the Commander of the 101st Airborne Division, effective 1 April, 1974. The division had been reorganized from parachute to airmobile in mid-1968 in Vietnam and designated the 101st Airborne Division (Airmobile). The parenthetical designation changed to Air Assault on 4 October, 1974 and the name of the badge was likewise changed. The US Army Air Assault Badge Commemorative Coin honors this tradition of service and excellence.

This stunning coin is minted in a rugged nickel alloy, and brushed with an antique finish. It is struck using special "splash" dies, which provide deep relief and excellent detail.