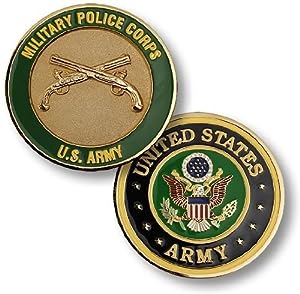 The Military Police Corps (MP) is the uniformed law enforcement branch of the United States Army, providing expertise in police, detainment, and stability operations in order to enhance security and enable mobility. Military Police have become a valuable asset to combat operations due to their versatility and wide scope of operation.

Although one of the youngest branches of the US Army, during WWII Military Police moved traffic along the Burma Road, supported amphibious operation on Normandy beachheads, and managed enemy prisoners of war from Italy to the South Pacific. During the Korean War they kept supply routes open and monitored prisoner exchange at the demilitarized zone. In Vietnam MPs first earned status as a combat support arm, as a result of combat success during the Tet Offensive. In the mid-East wars, Military Police provided area security, conducted battlefield circulation control, and exercised custody over thousands of prisoners. In the United States, while still fulfilling their fundamental function of security within the Army, MPs often provide disaster relief where their capabilities are vital to recovery.

The US Army Military Police Corps commemorative coin salutes the tenacity and bravery of all Military Police personnel who have served around the world in every theater of conflict or war, often in direct combat. This attractive coin is finished in rich enamels. The front is a reproduction of the Military Police Corps Branch Plaque, two gold pistols on a green field, while the reverse is the Great Seal, surrounded by United States Army.