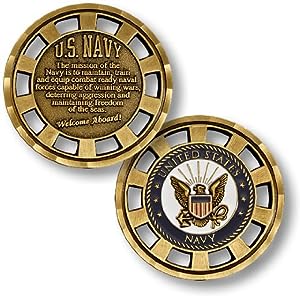 All hands on deck as Northwest Territorial Mint salutes the mission and history of the U.S. Navy in this uniquely designed challenge coin.

The mission of the Navy is to maintain, train and equip combat-ready Naval forces capable of winning wars, deterring aggression and maintaining freedom of the seas.

The history of the U.S. Navy began with its founding on 13 October 1775, with the Department of the Navy established on 30 April 1798.

There are three principal elements that comprise The Department of the Navy: The Navy Department, which consists of executive offices located mostly in Washington, D.C.; the operating forces, including the Marine Corps, the reserve components, and, in time of war, the U.S. Coast Guard; and the shore establishment.

The unique design of this challenge coin bears resemblance to the wheel of a ship. The obverse of this coin features the official seal of the U.S. Navy, while the reverse carries an inscription of the U.S. Navy mission. This U.S. Navy challenge coin is a great way to pay tribute to a distinguished career, or to celebrate the beginning of one. It also serves as a fantastic gift for proud parents and spouses of Navy personnel.

only $11.99
Not Available
View Add to Cart
CERTAIN CONTENT THAT APPEARS ON THIS SITE COMES FROM AMAZON SERVICES LLC. THIS CONTENT IS PROVIDED 'AS IS' AND IS SUBJECT TO CHANGE OR REMOVAL AT ANY TIME.